Facing It: Haircuts and Life 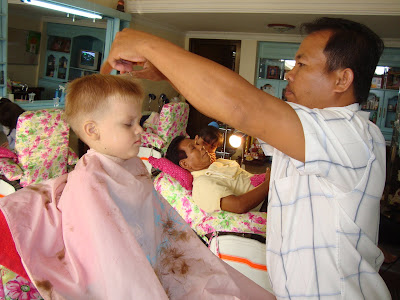 The next day I seriously fought the urge to put football helmets on each one, sit them on the couch, and command, "DON'T MOVE!" Evie was very concerned for Noah and kept rubbing his head and kissing him.

As the week went on his headaches started to fade and I decided to tackle the dreaded haircut. Noah's history with the barber is, well, tumultuous to put it gently. But, this time I shamelessly bribed him with a new soccer ball. I nearly fainted when he actually resisted the urge to scream and endured the haircut quietly, hands folded tightly in his laps and eyes squeezed shut. You are awesome, Noah!

is growing up in the midst of a happy and bustling family. His older brother, Noah, is anxious to show him how to build train tracks, play cars, and all those other things little boys love. Noah is quick to come by and rub his cheek against 's head, "Dats my brudder, I yuv him," he states. 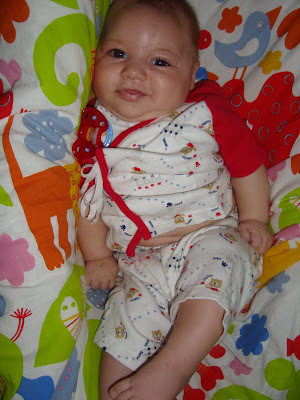 Today was the day.


For the first time since was born I began to research more about his condition, microcephaly.


I cried the whole time. And really didn’t learn a lot, but it was a step. It’s taken me four months to have the heart to look into his condition. To us he’s just been our child, , our sweet baby boy. Since birth we have poured out hearts into him, loving him, rubbing his soft cheeks, and snuggling him close. Although we weren't denying his problem it was just too overwhelming to consider all of the possibilities of his condition.

Today I measured his head and found that it has not grown in the past month. The neurologist prepared me for this but I still measured multiple times today, somehow hoping I was wrong. I wasn’t.


I called Darryl between his classes. “Bring him to me and let me love him,” he said. That made me smile and cry at the same time.

So we are beginning to face these things in life, now if only I can be as brave as Noah. 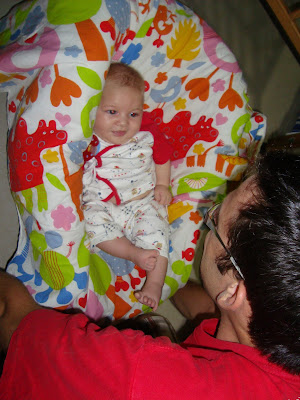 Kara, I can't begin to know your pain and grief over this precious son, but you write about it so well that you bring me to tears. I wish I knew words to comfort you, encourage you, give you peace. Know that you are in our prayers. This hymn has always been comforting to me, but never more so than in the long months after we lost our baby. Maybe it will help you.

Be still, my soul: the Lord is on thy side; bear patiently the cross of grief or pain; leave to thy God to order and provide; in every change He faithful will remain. Be still, my soul: thy best, thy heavenly Friend through thorny ways leads to a joyful end.

Be still, my soul: thy God doth undertake to guide the future as He has the past. Thy hope, thy confidence let nothing shake; all now mysterious shall be bright at last. Be still, my soul: the waves and winds still know His voice who ruled them while He dwelt below.

Be still, my soul: the hour is hastening on when we shall be forever with the Lord, when disappointment, grief and fear are gone, sorrow forgot, love's purest joys restored. Be still, my soul: when change and tears are past, all safe and blessed we shall meet at last.

Sending hugs and love to you as you tackled that heart-wrenching task (the researching). We're always praying for God's endless, faithful grace for you and Darryl. It's so wonderful to hear how much LOVE Calvin gets from his older siblings - what a big blessing for him.

What a sweetie... actually 2 sweeties.... I love the picture of Noah! So cute.

And Calvin is such a sweet baby, too. You guys are in our thoughts and prayers, and we pray that our Lord continues to give you the strength and courage you need to face the days (and months!) ahead.

We love our children so much and want the best for them, and we need to remember that God loves us so much more, and so much more perfectly than even we ourselves do! It is hard to trust in God when we have struggles, but that is when we need to cling even more to God and His promises to us, and we will feel His presence and see His tender fatherly hand in our lives.

Thanks for sharing with us, both your joys and your struggles... it helps us pray more specifically for your needs, and we know that God is a God who hears and answers prayers!

Beth, Kelly and Kate have said it so well. You are in the prayers of MANY! Lois VS

Hi- you commented on my son's page which led me to read your son's blog. My Thomas also has microcephaly. It is a very hard diagnosis. I try not to think about it but I do think about it all the time. It hurts my heart so much that this happened to my baby.

I understand your pain. It is such a difficult diagnosis. You really don't know what is in store for your child with microcephaly and there doesn't seem to be much research going on.

All we can do is love them and hope and pray.

Kara
I used to live in Cambodia (hence the title) with my hubby and four kids. We've worked in missions for years and now are settling down in America for a while to care for our son. Glad to have you drop in. Have a cup of tea with me?

Our son, Calvin, has a special story. You can follow it here.