Are You My Mother? 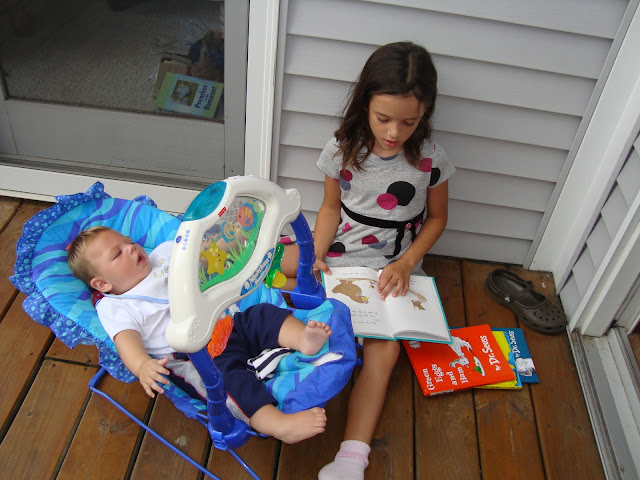 Sophie reading "Are You My Mother?" to Calvin
Sophie has assumed many responsibilities for Calvin.  Reading to him, getting him up as soon as he cries, carting him around as if he were a sack of potatoes (he enjoys it immensely, seriously).  But it hasn't always been easy for her.  She's only six, the oldest of four, and has had to miss out on a lot with us in all the busyness of life with Calvin.  The last year has been a complete blur to me.  Most nights I would get about 4 hours of sleep per night and then have long hard days with Calvin while managing the other three.  So details tended to slip by.

Like the time Sophie lost her first tooth.  She wiggled it and wiggled it, so excited to be venturing into this new stage of growing up.  I told her enchanting stories of the tooth fairy (much to Darryl's chagrin, but I protest that fanciful imagination is a vibrant part of childhood; I digress...) and had her waiting with great anticipation as she slipped her tooth under the pillow.

That night Calvin was not well and I was up the entire night.  The tooth fairy responsibilities were completely forgotten.  In the morning as I poured my fifth cup of coffee while jostling a screaming baby, Sophie arrived at the top of the stairs looking a bit crestfallen and bewildered.  "Mom, my tooth is still there!  The tooth fairy never came."

I peered at her over my coffee cup, taking a slow sip while frantically thinking how I could remedy the situation.  "Perhaps the tooth fairy forgot," I offered hesitantly.

"I'll try again tonight," she offered in that resilient childlike way and ran to her room to slip the tooth under the pillow again.

That night Darryl and I ended up in the ER with Calvin.  He was very sick and not responding.  They admitted him and we spent a tiring night with him.  The next morning was spent trying to keep my eyes open.

Sophie was completely oblivious to everything that had happened in the night.  As I stood in front of the bathroom sink forcing myself to wake up she wandered in.

Without a word she opened her hand to reveal a paper napkin all wadded up with a tooth in it. She just looked at me. My heart dropped and I frantically thought of a way to make her feel better.  I had nothing.  Just horrid guilt feelings and a sick feeling in my stomach.

After a few moments of silence she took the wadded up napkin, plopped it on the bathroom sink, looked at me, and in a dejected voice stated, "You forgot," turned and walked out.

I remember feeling just awful, not just over the silly tooth fairy business, but at the inability to meet all of my kid's needs or expectations. But before I went down Guilt Lane too far, I retraced my steps. Yes, we all have sacrificed a lot and in many ways feel like we have lost or given up a lot. However, perhaps there are many valuable things that my children will learn from this time.  Here's a few that come to mind:

I hope they see that sacrificial love and undying commitment are main ingredients of "family".

I hope they learn the value of caring for one another no matter the need.

I hope they will be tenderhearted and protective to those more vulnerable than them.

I hope they will understand the depth of love a parent has for a child, for them.

I hope they will know the perfect Father who never forgets.

I hope they will live with the reality of the fleetingness of life and the foreverness of eternity.

Thank you for sharing your "Sophie" stories with us Kara. I'm sorry she was disappointed, but love the things that you "hope" for all your children. I think of you often, and miss seeing you and Daryl and the kids. I can't begin to understand all you continue to go through, but I'm so glad you share it with us, and that I can learn from the lessons you are learning. Say "Hi" to Sophie, and tell her I hope she's having lots of fun at school, even though you can't home school her at this season in your life. Love you so much Kara, and Daryl and your kiddos too! Hugs for all of you. Karen

Oh my ... that made me cry. Perfect hope list you have there. What a wonderful place to take your thoughts.

Ahh, my heart is pierced, by your beautifully worded description of reality, and by hope. Keep walking,and we'll keep praying.

Wow, Kara. What an excellent post. And what a wonderful sister Sophie is and that's exactly what you are praying and hoping for as her mom. You are blessed to have her, as is Calvin - and vice-versa - ah, the beauty of a family.

Kara, you are radiant in your wisdom. Simply radiant. And we are blessed to bask in your glow. Thank you so very much for sharing your thoughts. You bless me.

Your story touched my heart...mostly by your eternal picture of what your children will learn. But dont beat yourself up too bad...this toothfairy has forgotten a number of times and I dont have a special needs child...I usually say something like,"oh, well, she could not find your room in the dark and left the ___with me! " :) Oh boy, the lies! But I agree about the childhood fantacies! Christina just lost her first tooth and I vowed not to forget again (poor, Olivia was forgotten the most while I had twin babies), so I had to stay up and play cards with the older kids with a dollar under my leg until she fell asleep. I would not even venture away from the bedroom door or I knew I would forget again! Youre a great mom! We love and miss you!!! sheryl

Kara
I used to live in Cambodia (hence the title) with my hubby and four kids. We've worked in missions for years and now are settling down in America for a while to care for our son. Glad to have you drop in. Have a cup of tea with me?

Our son, Calvin, has a special story. You can follow it here.